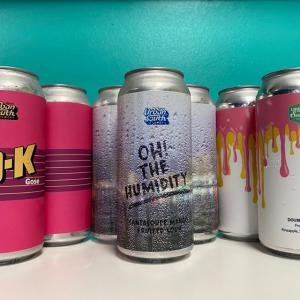 [related_posts_by_tax title=""]
This has been a difficult year for all of us, and Urban South is working hard to do what we can to give our fans something new and exciting to look forward to each week.”
— Jacob Landry

NEW ORLEANS, LOUISIANA, USA, October 15, 2020 /EINPresswire.com/ — Urban South Brewery, the largest craft brewery in New Orleans, is excited to announce its plans to release more than 15 unique beers during the month of October. Since April of this year, the brewery has been committed to weekly beer releases each month. New beer varieties are available on Urban South’s online store each Thursday, where customers can place orders for their favorite brews and pick up their order at the Tchoupitoulas Street taproom.

“This has been a difficult year for all of us, and Urban South is working hard to do what we can to give our fans something new and exciting to look forward to each week,” said Jacob Landry, founder of Urban South Brewery. “Our brewing team has enjoyed the creative challenge of developing new beers, researching exciting trends and ingredients, and collaborating with like-minded organizations.”

10-K Gose: This fruit punch sour gose packs a punch. 100% of the proceeds from beer sales will be donated to the Louisiana Craft Brewers Guild to help promote and protect the Louisiana craft beer industry.
Release Date: October 1

NOLA Dead IPA: Urban South has partnered with NOLA Dead, the local Grateful Dead fan club, for the last two years on this sunshine haze dream creamsicle IPA. This collaboration carries the same name as the group and is a juicy IPA brewed with Motueka, Galaxy and Simcoe hops.
Release Date: October 15

The Magnificent: An homage to Morgus the Magnificent, the iconic New Orleans mad scientist. This sour base is finished with hibiscus, beet juice and raspberries for a bright red color and a burst of flavor.
Release Date: October 22

PSL Cream Ale: Fall’s favorite flavor is served up as a cream ale instead of Urban South’s typical stout this year. The result is a lighter, more sessionable beer with notes of sweet pumpkin.
Release Date: October 29

Due to the national aluminum can shortage as a result of the pandemic, Urban South recently purchased cans from Galena Brewing Company in Illinois. For this reason, customers may see the Galena name on canned beer purchased from Urban South Brewery for the rest of the month.

New beer offerings will be released on Thursday of each week and will be available to order online or purchase in person at the Urban South taproom. Fans can follow along on Urban South Brewery’s social media channels for the most up-to-date information on beer releases (@urbansouthbeer.) The taproom is open for to-go beer sales Monday through Friday from 12:00 p.m. to 6:00 p.m. and Saturday and Sunday from 11:00 a.m. to 4:00 p.m.

About Urban South Brewery
Founded in 2016, Urban South Brewery inspires community and fellowship through the gospel of good beer. With deep roots in Louisiana and a new satellite location in Texas, Urban South – HTX, the award-winning brewery is making its mark in the beer industry. Recent accolades include: 2020 Beer Army Awards (Gold and Silver), 2019 U.S. Beer Open Championships (Silver), 2019 Best of Craft Beer Awards (Bronze), 2019 Beer Army Awards (Gold and Silver), 2018 US Beer Open (Silver), 2018 Can Can Awards (Gold, Silver, Bronze) and 2018 Beer Army Awards (Gold). Urban South prides itself on being strong community partners, and – with a belief that beer is a family affair – the brewery features a family-friendly taproom. For more information, please visit www.UrbanSouthBrewery.com and follow on Instagram, Facebook and Twitter for all of the latest information on events and new releases. @urbansouthbeer @urbansouth_htx