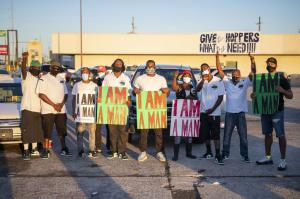 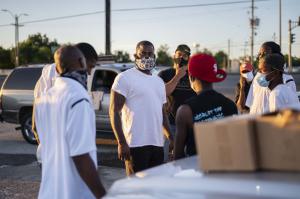 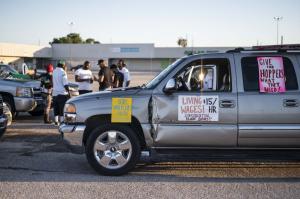 Junior Galette: “The Black Man’s Struggle in America is Universal”

NEW ORLEANS, LOUISIANA, UNITED STATES, July 17, 2020 /EINPresswire.com/ — Junior Galette, star NFL player, activist, and philanthropist, who started his NFL career as an undrafted free agent with the New Orleans Saints spent hours with City Waste Union sanitation workers (who refer to themselves as “hoppers”), learning about their cause, demands, and joining in their protest for recognition and protection.

On June 11, 2010, Galette, an NFL outside linebacker who rose from an undrafted rookie to a player-elected Team Captain with a $42+M deal, met with the hoppers at 4 a.m. to listen and learn about their demands and join their protest. The hoppers have been protesting daily at 4 a.m., the usual beginning of their workday, since May 1, 2020, seeking personal protective equipment, an increase of their wages from $10.25/hr to $15/hr, hazard pay of $150/wk during the pandemic, and increased maintenance on the garbage trucks to improve their working conditions. Less than a year ago Metro Services Group, the company who hires the hoppers as contractors, settled a federal labor dispute that it paid its workers below the federally mandated minimum for years.

As the hoppers passionately explained to Galette, due to stay-home orders, garbage collection has increased 30-40% during the COVID-19 pandemic, but those directly exposed to the garbage—the sanitation hoppers—say they have not received personal protective equipment nor hazard pay. The workers say they are being paid less than a living wage in New Orleans while serving in one of the nation’s most dangerous jobs.

Speaking about the men he met and spent hours within the wee hours of June 11, 2020, Galette said: “Let me tell you about some fellow protestors I’ve learned about since the movement got going. At 4 am I met up with the City Waste Union protesters—the garbage hoppers—in New Orleans and spent a few hours with those guys. I learned at 4 am, protesting with them, that the Black man’s struggle in America is universal. Regardless of whether we are talking about NFL paydays or the fight for hazard pay for garbage hoppers during a pandemic, fair is fair and right is right.”