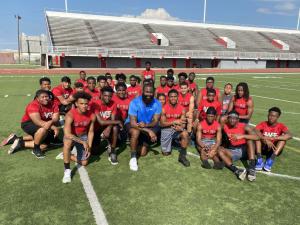 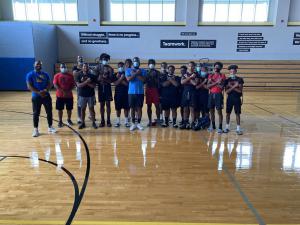 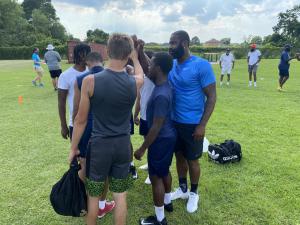 Through June 2020, Galette visited with the football teams of West Jefferson High School, Marion Abramson High School, L.W. Higgins High School, and Benjamin Franklin High School. Galette talked to each team about the motivation, determination, and drive necessary to succeed on the football field and off. One player’s take away was “the importance of continued hard work, year after year, to build on your accomplishments and continue moving towards your goals.” Another key takeaway was Galette’s revelation that “when he had to bulk up as he played in college and the NFL, he would eat stacks of grilled cheese sandwiches, as many as ten in a single sitting!”

For Galette, meeting with and motivating these students is a way of giving back to the community that he wished he would have had as a teenage player. “Looking back, I was determined to play in the NFL no matter what—it’s the only job I’ve ever wanted— but whenever I had the opportunity to meet or talk to someone who played in college or professionally, it gave me a little more hope and momentum that I, a kid from Haiti who learned English when I came to America at nine years old, would make my NFL dream a reality. I did, going from an undrafted rookie to a player-elected Team Captain on a $42+M deal, and I want these young players to know with hard work, focus, and a whole lot of determination and sacrifice, if life doesn’t get in their way they can make it too.” Galette continued, “these young players are the future of the NFL, but for many of them, life as a young Black man in America might prevent their dream. Black men in America are seven times more likely to have interactions with law enforcement, and if any of those interactions go sideways, these players’ lives can be over in an instant, before they get the chance to fulfill their dreams. I want better for these players. I want them to succeed and achieve their goals, and I want them to live. It’s important to me to come out and talk to them as they are practicing in the hot Louisiana summer so they know they are seen, and they matter.”