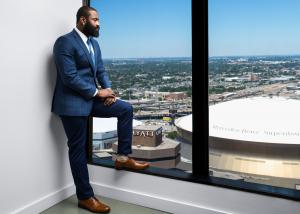 In the spring of 2017, Galette, an NFL outside linebacker who rose from an undrafted rookie to a player-elected Team Captain with a $42+M deal, was rehabbing an Achilles injury when he attended Mississippi’s Biloxi Black Beach Weekend. While attending, Galette found himself in the vicinity of revelers who started fist-fighting. Keenly aware of the repercussions of off-field misconduct for an NFL player, Galette ran to get away. A police officer gave chase, tased Galette, pinned him to the ground, handcuffed him, and took him into custody, booking him with “failure to comply.”

The failure to comply charge against Mr. Galette was dropped. Recent attention to the bodycam footage of the Mississippi encounter has highlighted what Galette experienced as a Black man during the arrest: after being tased, the officer, standing over Galette, declaring himself “a big white guy,” mocks Galette when he tells the officer “I can’t breathe, hold on, hold on,” responding “You can’t breathe? You’re talking to me.”

As Galette noted in his Open Letter to NFL Commissioner Roger Goodell seeking equitable treatment of Black players, Black men—including Black NFL Players—in America are seven times more likely to have encounters with law enforcement than are their white counterparts, a startling statistic experts attribute in part to institutionalized racism and systemic, and systematic oppression. Black NFL players are not immune from such adverse interaction with police, but under current NFL policies, a player merely accused of a crime can be suspended from playing even before having the opportunity to appear in court and exercise his constitutional right to prove his innocence.

Galette has never been convicted of a crime; however, because of his interactions with police—interactions he is seven times more likely to experience because of the color of his skin—Galette believes his name and reputation have been unfairly tarnished in the eyes of the public and NFL decision-makers.